Home / Rentals / Targa Wrestpoint
August 5, 2010
Rentals, Targa Tasmania
0
0
The end of January saw the TargaRacing team head to Tasmania for the first event of the 2011 tarmac rally season – Targa Wrest Point. This 2 day event, based in the hills to the south west of Hobart, consists of 14 stages totalling almost 210km of competition.  This year we were running 4 NC MX5 and debuting a BMW 130i, the first of 2 we plan to run in the bigger Targa Tasmania later in April.

The crews are –ADAM DODD and LEE C-MILES in virtually their 1st event
MATILDA MRAVICIC and KELLY HANDLEY back for their first pairing together
HARTLEY SUTCLIFFE and HARTLEY SUTCLIFFE JNR debuting
ANDREW MCKAY and ALEX HAILSTONE back to defend their 2nd place in Targa High Country
GEOFF KENNEDY and GEOFF NEALE debuting the BMW
Review from Alex Hailstone –
DAY 1
The Mx-5 Racing team looked fantasic, props to Chris for really making it look spectacular.The First days stages were. .
LUCASTON 3.17km
Short stage, mainly to get everyone back in rhythm There was a small bridge and a tight left one of the cars went off and that was unfortunately the end of their weekend.TAHUNE 22.94km
Definately one of my favourite stages over the weekend. Starts out long and flowing, few bumps and a little gravely. The stage is just slightly downhill and tightens towards the end. At the end of the Tahune stage there was a 90min lunch and servicing break as everyone had to wait til all cars had completed the stage before the first car headed back up.AIRWALK 22.96km
The reverse of Tahune, so slightly uphill and the stage is a tad more open in reverse.DOVER 17.11km
After heading down and back to the Airwalk we headed over to Dover. Dover is a tight bumpy stage that loops around the Esperance Coast Road. One of the scrutineers was telling me this was the most dangerous stage of the event, we had an interesting run through Dover. Our run through Dover was sketchy, but we had no big moments and both came out the other side in agreement to dail it back for the rest of the day.After Dover was the repeat of Tahune and Airwalk, then on to Longely.
LONGLEY 12.31km
BUMPY!!! Hellishly bumpy, but also one of the more enjoyable stages of the weekend. Quick little downhill run that suited the Mx-5 to a T.. bump steer was an issue for the first 2km or so but after that it was beautiful, alot of L2 /O which meant my driver had to trust me enough to barrel up an over a crest without being able to see where the road goes. Good fun and a great stage to finish up Day 1 of racing
Day 2:
Second race day!
Cold start this morning, but very exciting. Alot of doubling and looping today, stages for day two were on on the other side of the Huon river this time. Not that I caught most of it, but the scenery was quite impressive. Overall we had a relatively great day!PELVERATA 12.54km
First stage of the day! The stage loops around the river, from what I remember its a fast stage, tight to start with then flowing towards the end, when we went through there were no issues and no cars off.WOODBRIDGE 10.54km
Fairly open, slightly uphill stage. We completed this stage twice on day two, almost got lost due to some silly wording in the roadbook, almost started at the end of the stage.. LOL got some funny looks from officials but thankfully this delay moved us back in the pack a bit. We were reseeded over night and were put too close to the front, spent some time on Woodbridge doing overtaking.OYSTER COVE 12.39km
Again we completed Oyster cove twice on day two. It has a few tight surprising turns but nothing too bad, alot of good fun through here and noone off on either time we went through.CYGNET 12.45km
Wow what a stage! There are bumps galore alot of flat over crests on straights, you get air in a few places and its very flowing towards the end. We had some very interesting moments on this stage Waiting to begin the stage they had to send in police to calm down the locals who were enraged at their road being closed for 4hrs on a Sunday.
Unfortunately there were quite a few off on this stage, our second run through was very sobering. One of our friends had put his ute sideways into an embankment about 2km into the stage. He was all ok though it threw it us for a bit and we went sideways up the hill..! Nothing uncontrollable and a bit of fun. Altough further along there were two WRX’s into embankments, one head on after a 750m straight over crest and another just after a right hand turn everyone was ok, two of the competitors were taken to hospital for xrays and were given the all clear.
We finished this stage calmly and were happy just to make it to the end.At the end of the day we had Adam Dodd and Lee Challoner-Miles on the podium in third place.
End of Targa,
It was great, a few drinks at the Targa bar after, then onto Cargo for Pistachio Dukkah Pizza. Later back to Wrest Point for more drinks at Targa bar, thankfully I didnt have an early start! On the Monday I flew into Melbourne for a real holiday before heading back up to Sydney last night.Thanks to Chris Gough and Adam Spence from TargaRacing for all their help leading up to the event and over the weekend. Definately looking forward to Targa Tas! 8weeks and counting. 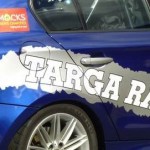